I remember the first time I had been introduced to Nutella. 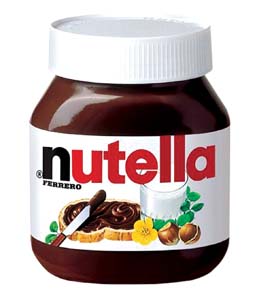 My best friend in 7th grade made me a Nutella sandwich one morning before school. 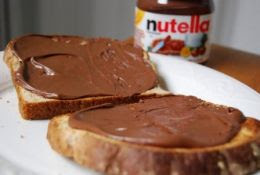 One bite and I was in ♥.
Up until recently, I thought the only way to eat Nutella was between two pieces of bread…or simply with a spoon (no judging!). Then I started noticing all kinds of goodies that had Nutella in the ingredients. So I thought I would share with you some of the Nutella YUMMINESS that is floating around blogland (and Pinterest of course) that I have been eying and drooling over.
Homemade Nutella

Source: insidebrucrewlife.blogspot.com via Kara on Pinterest
Self Frosting Nutella Cupcakes

Source: google.com via Kara on Pinterest
Nutella on Waffles
Side Note: Don’t you think Nutella swirled in pancakes would be good?? I think they’d be the bomb digity.

Source: cookincanuck.com via Kara on Pinterest
I stumbled upon some super cute Nutella items that made me smile…

Source: styleandthecity.com via Candice on Pinterest
And how cool is this??!!

Source: weheartit.com via Paula on Pinterest
Thanks for joining me for Food-a-licious Friday!
I hope we can still be friends now that you know about my ♥ obsession with Nutella : )
Have a great weekend!

« I {heart} Feathers
Mine for the Making Signs »

This error message is only visible to WordPress admins